Aimee is the Deputy Chairman of the West Ham Conservative Association. She is an international lawyer and a civil servant since 2008 working in different departments/branches of the government. Aimee is also one of the "first wave" of residents to live at the Olympic Village since 2013 and was also a Games Maker at the London 2012 Olympics.

Having lived in the UK and this Borough for almost two decades, Aimee is keen to make a positive change, and contribute her skills and knowledge for the betterment of the very exciting London Borough of Newham. She is a keen advocate of the Environment, Sustainability, EDI (Equality, Diversity & Inclusion) and most importantly Entrepreneurship.

Aimee is passionate about the basic universal values of Fairness, Justice, Honesty, Trust and Hard Work to name a few. She is also a perennial volunteer founding several organisations, sitting on its Board of Directors and Board of Trustees or just a plain volunteer member of groups/organisations beneficial to society and business. She believes that she can do more in politics/public life and her way of paying forward.

She is a respected leader in the Filipino community and well-loved by her colleagues in both the private, public and third sectors. She is a Fellow at the Institute of Directors and a Fellow on Intellectual Property Law (Japan Patent Office/WIPO). She has been a finalist for two "Director of the Year Awards" (DOYA) 2021 by the Institute of Directors (IoD) East of England Branch for International AND Social Value, Sustainability & Impact award categories. 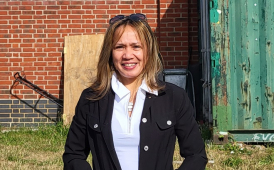