Andrius has been a Conservative activist since 2005, campaigning in every election in Britain for well over a decade and a half, and before that in Lithuania for all his life. He moved to Newham in 2003 and currently lives in Stratford. In 2018 he stood in the local elections for the Stratford & New Town ward and when the results were declared he had more votes than any other Conservative candidate in the whole of the London Borough of Newham.

He studied Construction Management & Economics in University of Greenwich and works as a construction supervisor, actively lobbying to build more homes to meet the housing demands. A leader in the Lithuanian community in this country, he is the Chairman of Conservative Friends of Lithuania. He was first elected as the Association's Campaigns Officer 2022, having previously served as Community Liaison Officer. 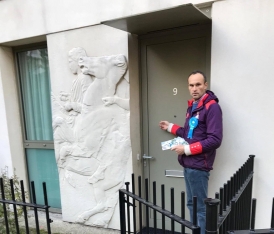